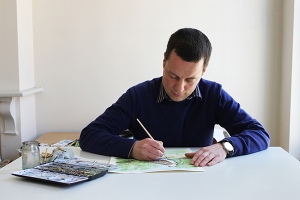 Hendrik Gheerardyn was born in Bruges, Belgium. Since childhood, he has been passionate about nature and always liked drawing and painting. After his biology studies, he earned a Ph.D. in Sciences (Ghent University) and researched the taxonomy and ecology of a group of small marine crustaceans (namely copepods) for more than eight years. A major part of his work consisted of describing and drawing new copepod species, and these were published in international scientific journals (such as Zoological Journal of the Linnean Society, Journal of Natural History and Journal of Crustacean Biology). Through these microscopic investigations, he further developed his great sense for detail.

Next to his career as a biologist, he never lost his interest in the visual arts. During more than 15 years, he took various art courses (such as Painting and Graphic design and illustration) and studied part-time at the City Academy of Fine Arts in Bruges and St-Lucas Arts Academy in Ghent.

As a natural science illustrator, he combines his background in scientific research with excellent drawing skills to produce accurate and lifelike paintings and illustrations. As a zoologist, he mainly paints animals, but also has a strong interest in botanical, maritime archaeological and general science subjects. His work is characterized by scientific accuracy and fine details, and watercolor is his preferred medium.